Welcome to some more Star Citizen News, updating you with the latest for the weekending the 25th of March and an important Alpha 3.2 Survey to get involved with too.

Roadmap Updates | https://robertsspaceindustries.com/roadmap/board/1-Star-Citizen
Star Citizen 3.1 is currently in PTU with Evocati, RSI Subscribers and Concierge having access currently. We are Currently on Patch 3.1.0h (which added the Reclaimer & Terrapin to the rest of the 3.1 ships), expect more patches and more players getting access before the LIVE build at the end of March.
The Gemini R97 Shotgun has been moved to 3.2.0.
We may start to see NPCs OBVIOUSLY with Quantum Jammers in a group when we have been interdicted. They will need to be taken out OR you’ll need to travel far enough away from them to go back into Quantum.

3.1 Ship Sale & Price Rises | https://robertsspaceindustries.com/comm-link//16470-Newly-Flyable-Ships-Ready-For-Takeoff
The new ships & vehicles coming with 3.1 (along with some others) are on sale now. They are available I believe at their original price for Warbond & new increased prices (around 10% more)  if you are using any form of Store Credit as expected.

There has also been some pretty awesome New Ship & Vehicle Showcases with each of the new 3.1 vehicles, all available on the Star Citizen Youtube.

3.2 Feature Survey |  https://robertsspaceindustries.com/comm-link/engineering/16468-Alpha-32-Feature-Survey
3.2 is the Next major Patch coming at the end of June to a Live build.
And items need to be prioritized, CIG have a Feature Survey so that backers can influence what is focused on for the patch.
It’s worth your time voting here as this is something where you voice matters in the short term. Eventually ALL of these mechanics will be going in Star Citizen AND there is obviously a lot of other bits coming with 3.2, this was just to prioritize certain OTHER tasks.
If you’d like to see exactly what is planned please checkout my 3.2 Roadmap Video, links below to that and the Feature Survey so you can VOTE!
It’s possible everything might make it in to the patch BUT more likely only some of the Features listed here, so what are they?

Quantum Linking
This feature gives players the ability to sync up with their friends when making quantum jumps. Aside from making grouped multi-ship travel possible, Quantum Linking also helps if you are interdicted, as the friends you brought along with you can help. This system will be used in tandem with AI or player-created missions through the service beacon, so the people hired to help will be linked to you when they jump.

Improved Interdiction
Work on this feature will create a variety of different interdiction scenarios for players, as well as provide the opportunity to trap other players and AI Non-Player Characters using a Quantum Jammer that can be added as a ship component or deployed in a self-powered buoy, like a mine.

Service Beacon Improvements
The Service Beacon will expand and evolve to include new contract types, additional filters, and more feedback precision. AI characters will be able to interface with the system so that they too will be able to request help and provide assistance to others, which will in turn increase both how much of this type of “immediate” content we can offer at any given time, as well as the likelihood that someone – whether player or Non-Player Character – will be drawn to respond to your calls for support.

First Tier of Guilds & Associations
They are going to create member associations within the Universe that give players different benefits. These will ultimately include the Bounty Hunter’s Guild, Merchant’s Guild, etc., but there will also be member-based services, themed to fit different player types. For example, the United Wayfarers Club provides repair and refuel assistance for pilots broken down in space and also grants discounts for these services at CryAstro.

Party System
These improvements will improve the player’s ability to create groups, allowing you to team up with friends to join the same game instance and cooperate on jobs and missions.

Team Chat
Improvements to the team chat system that will polish communication between players and make the experience more robust and intuitive. Work on this system will also begin to factor in the incorporation of Spectrum into the game.

Economy/Shopping UI Experience
The feature includes the implementation of Shopping Kiosks in the stores and increased variation of available products, including ship items and weapons not physically available to display (or even buy) in stores.

Item 2.0 Ship Systems and Weapons
Feature work would include finalizing Item 2.0 functionality that, allows them to overheat, misfire and suffer critical failures based on factors such as increased wear or damage. It would also introduce deeper functionality to upgradeable items so new power plants, shields, coolers, stealth and comms/radar all make a marked difference to the ship’s performance based on how they are configured.

FPS AI Combat
The first stage of getting combat AI into the Persistent Universe. This would expand mission types by introducing the risk that an AI could be waiting to ambush you on a distant moon, or in a hulk drifting in space.

Major Gameplay Mechanics
Also as mining will be the primary profession-based mechanic introduced in Alpha 3.2, they would also like to know which of these three (Salvage, Repair & Refuel) gameplay mechanics you would like to see implemented next. The feedback will help them decide how to prioritize  for future releases in order to make room for these continued quality of life improvements.

There was a little Sneak Peek for the Kastak Arms Scalpel Sniper Rifle in the Newsletter. 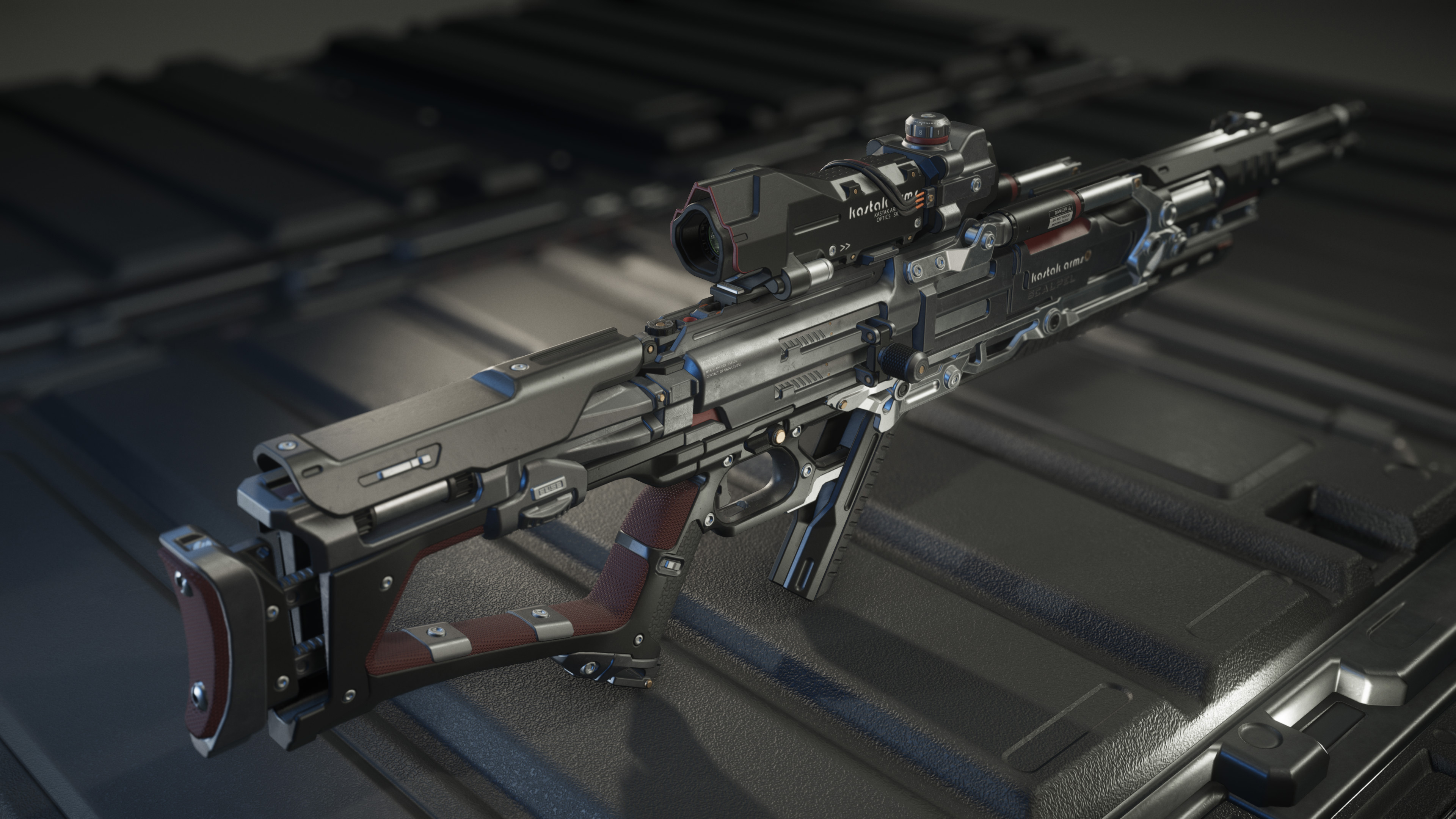