Welcome to some more Star Citizen, this time with a all we know about the Hercules so far with the Concierge Pre-Sale Information.

The Hercules Starlifter is manufactured by Crusader Industries
And is primarily a Military Grade Transport Ship that can haul vehicles from space to ground and vice versa.

It comes in 3 variants:
C2 – Civilian Freighter | $300 warbond OR $360 credit
M2 – Military Dropship | $400 warbond (/w free Cyclone) OR $480 credit
A2 – Hercules Gunship | $600 warbond (/w free Nova) OR $700 credit
There is a multi-pack with all 3 versions $1300 (inc Cyclone & Nova /w the original concept skins) / $1540, both of the Complete packs have LTI on all the contents.
Other than the complete packs, LTI is only available with the Warbond version of the ship. Warbond are purchases without using store credit and typically also give you a discount of around 10-20%.
The Concierge pre-sale for the Hercules is on until the 11th of May when it’s available for everyone. Buying during the pre-sale gives backers a philanthropist badge for the forums.
PLEASE REMEMBER THAT THESE SHIPS WILL BE AVAILABLE IN GAME, with in game money. And they are currently not scheduled on the roadmap, meaning the earliest you are likely to have them in game is end of 2019 realistically. If you do buy one you’ll get a loaner ship until it’s ready BUT I don’t know what ship or ships that will be yet. 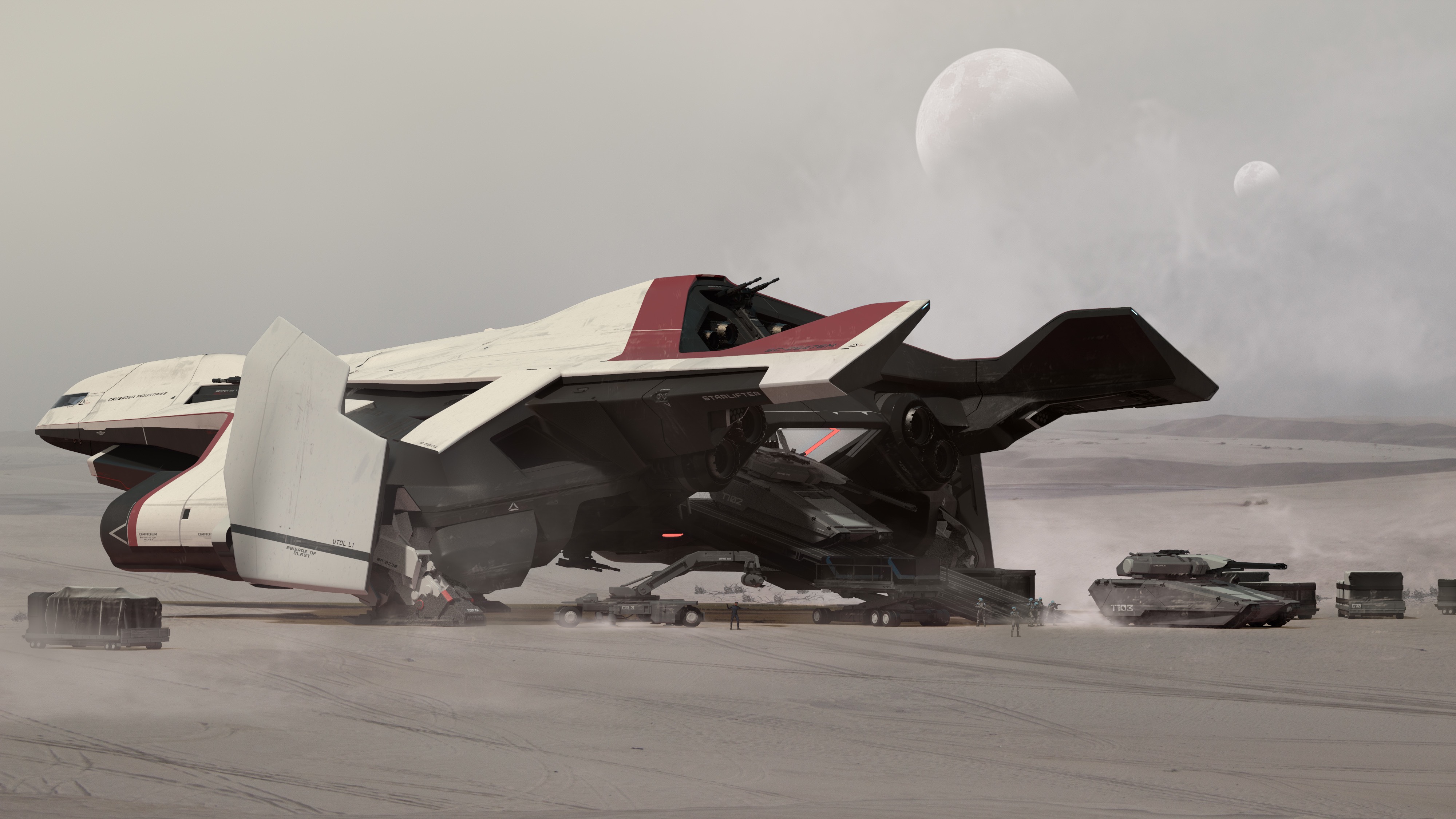 C2 Commercial Hauler
The C2 or “base variant” is a commercial hauler
It can hold 624 SCU this will be enough for 2 Novas and some cargo – this is a little more than a Caterpillar.
It has 4 remote turrets, 2 on the neck & 2 on the back. These are Size 3 and 4 weapons
So it’s similar in length to a Starfarer but 1.5 times wide.
The C2 is suited to 2 crew. 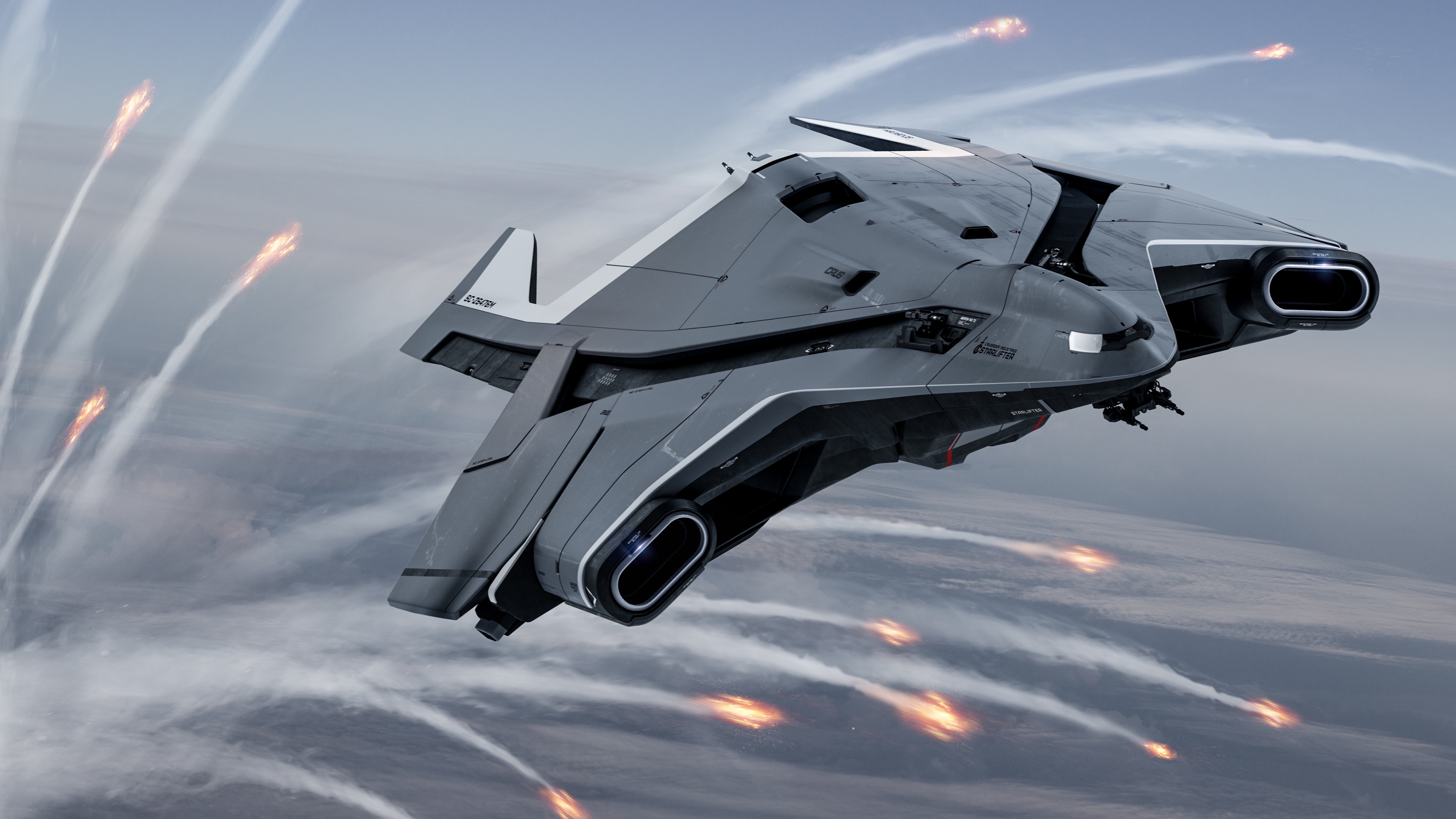 M2 Military Dropship
M2 is the military version with more armor
An additional Size 3 remote turret at the front, under the nose
It has less cargo space than the C2 at 468 SCU about 20% less than a Caterpillar, just enough for 2 Nova tanks.
The M2 is suited to 3 crew. 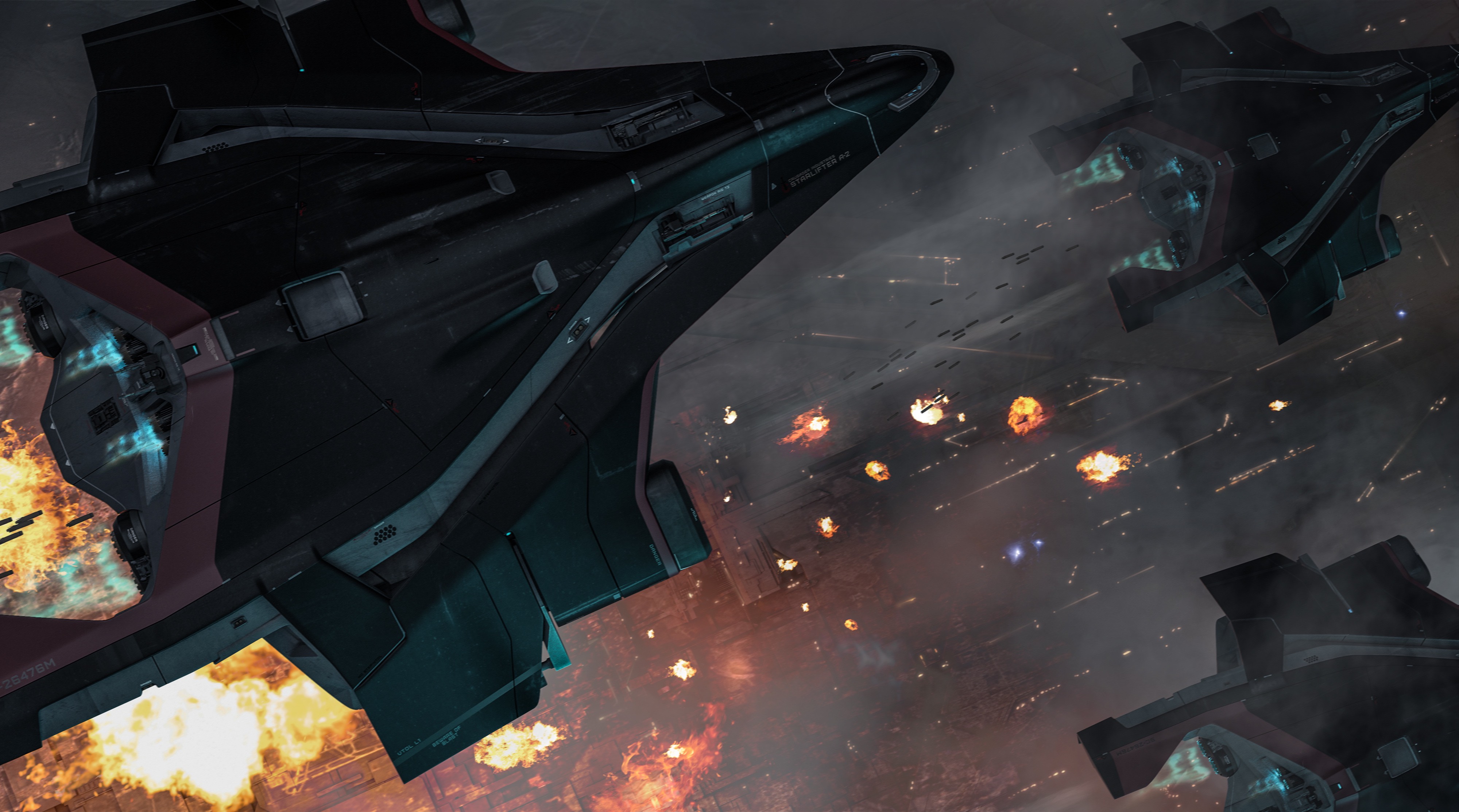 A2 Assault Gunship
The A2 is a full on Assault Gunship
This Gunship has 2x Size4 pilot controlled guns, 3x Size3 & 2x Size4 turrets as well as 2x Size5 turrets. Realistically as these are spread across the ship each should have an operator whether they are manned OR remote.
You lose half of the cargo space that the C2 has, so 234 SCU total, which is around the amount of a single Tumbil Nova or 40% of the capacity of the Caterpillar.
The reason you get less cargo & vehicle space is for the bomb module that you can store 4 GIANT MOABs, I am assuming these are the biggest BOMBs in game.
These bombs are gravity assisted, so very useful when attacking the ground, much harder to use if at all in space, there are not plans for these being replaceable with torps or missiles either BUT there is some modularity and they talked about them being replaceable with what was described as many bomblets.
The guns are spread across the ship and it really requires multiple crewmen to operate effective & some are angled downwards, for air to ground use.
The A2 is suited to a massive 9 crew for that bombing and turret operation.

Common Hercules Info
It’s around 100m long and 70m wide which is the same length as a Starfarer and around 1.5 times wide.
The C2 & M2 can carry 2 Nova Tanks or a mixture of smaller vehicles
The A2 can only fit a single Nova or smaller vehicles.
Any CURRENTLY ANNOUNCED ground vehicle in Star Citizen can fit in the Hercules, including an Aurora for those inclined to put space ships in it.
The Hercules will have a very long operating range, it has fuel scoops and such.
Tho there is a flight deck and cargo area with a lift & a habitation area was mentioned but I wouldn’t use it for exploring.
All Variants have a ramp on the front and rear, both allowing a Nova sized vehicle in and out.
You can open the ship mid flight or landing, the Nova is able to be dropped from a height hopefully without sustaining damage, this also allows for the potential for you to have ships or snubs inside that can launch mid travel.
The Hercules has a powerful VTOL system for atmospheric flight and landing.
The doesn’t have to hold just ground vehicles, it could hold a large amount of marines or ground troops, it can be used as an armored dropship for a variety of purposes as well as freight.
Tho similar designs these ships are true variants, so don’t expect to be able to swap a module to change the C2 or M2 into an A2.

My Thoughts
I personally am probably going to grab the C2, for me the hercules has a more focused role on transporting Tanks & vehicles to planets BUT I also envision these being used to transport racing ships and vehicles around too for the scramble races in the future.
The A2 is far too expensive BUT it’s one I’ll be grabbing in game for sure.
One of the things that this semi-confirms is planned large scale ground battles and base defenses. The need to bring multiple vehicles in, the giant OP sounding Gunship that is the A2, those bombs have got to be used on something.
The Hercules is an exciting ship with a definite place in the Verse, the A2 version is a little too overpriced, if they wanted to make it rarer in the Verse they should of maybe sold it for $450 and with a limited number imo.