Roadmap wise there isn’t much in the way of features moving around yet, there has however been a lot of tasks added to some of the features already planned for each patch.
29 new tasks for Hurston, 4 for Lorville and 4 for the small rest stops.
Hammerhead tasks up from from 29 to 111.
Object Container Streaming Across all of it’s subsets of task now has 154 tasks completed of 198.
A lot of features have seen a little more progress weapons, modularity, scramble races, the phoenix.
We need to wait & see over the next couple of weeks for updates to what might move to 3.4 with the patch & to get some info on 3.6 and for us to have more info on the 3.5 patch too we are always going to be in a bit of flux after a Quarterly Release.

We’ve seen a flurry of mini-patches and hotfixes some of which are in testing:
The latest was a PTU Patch 3.2.1d which has added a few more changes to that 3.2.1 build,

Currently the testing focus is Combat versus AI opponents.
There is a known issue – A performance hit occurs at first PU load that can stall the game for several seconds.
Though they are dialing in ESP for 3.2.1 to a degree,
I was talking to Jolli001 a streamer from Angels of the Warp  go check him out, he was saying that David & the ESP/IFCS Team were likely going to be tweaking the systems into 3.4 in December as there are a lot of dependant systems that all need some work.
Turret Gameplay is being refined for the 3.2.1.
We are also getting visual previews of items on the shopping terminals.
Power Allocation has seen some work tweaking it and fixing OverClocking
Mining Mechanics are also getting some audio improvements. 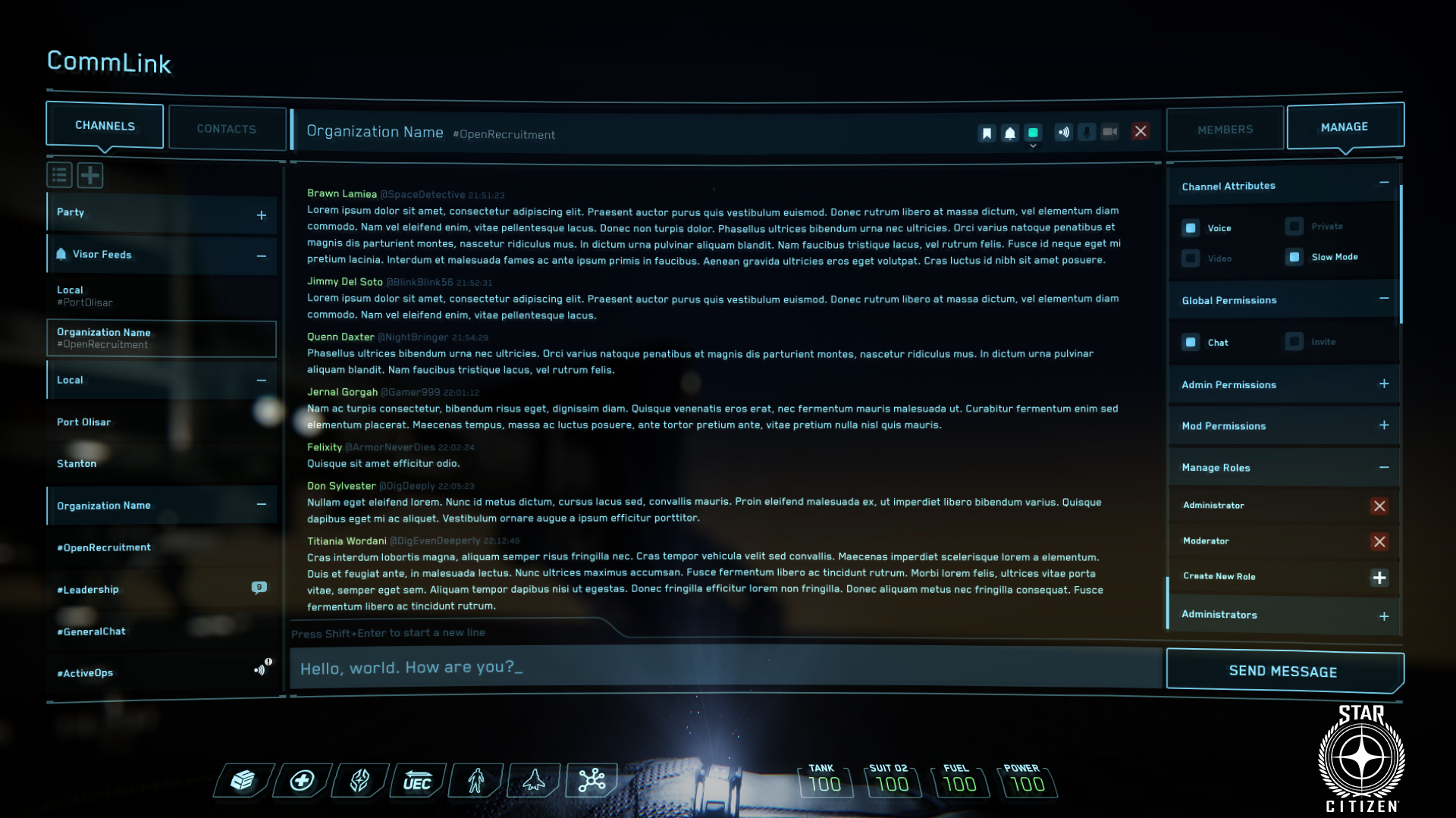 We saw a Preview of the Changes Coming to the MobiGlas CommLink & some of the spectrum integration there, having ORG, thread feeds & messaging.

This week’s Reverse The Verse was Let’s Make a Character, it’s nothing I can really summarize as it was a GameDev more of look at my process for early Concept art from JLee:

Calling All Devs
There still need to convert countermeasures, thrusters & missiles to Items 2.0 to have the ships 2.0 stuff complete.
They are adding negative effects of degradation of items such as misfiring & malfunctioning when a item is overstressed and/or degraded.
QT Speed is based on the size and type of QD your ship has, with larger drives being faster & accelerating quicker BUT taking longer to calibrate and Spool.
Arena Commander will receive updates from anything they change in the PU, they may get a dedicated team for AC & SM in the future.
Missions will not scale based on what ship you bring or the amount of players, missions will be static with their difficulty you’ll have choice with what missions to select and need to work out what to bring to complete each one efficiently.

Around The Verse
I ranted a reasonable amount last week about the Shortness of Around The Verse, this week was much better actually the episode was around 8-9 mins long and contained some good info:
They are implementing & experimenting with some new Mocap for Shop Keepers.
We saw internal whiteboxing of the 890Jump.
The 600i Touring Variant is almost complete.
Banu Defender is seeing work, this will define the rest of the Banu Series of ships with Materials and Assets.
Utilitarian Hangars & Larger Habs are getting lots of work for Hurston as well as generally being reusable assets.

In Other News
There are players protesting the state of Arena Commander by blockading CryAstro Services in a large amount of servers across the PU, it’s interesting Emergent Gameplay to me tho.
CitizenCon 2nd Wave Tickets are on Sale, for the 10th of October in Austin Texas, with the addition of being able to buy a ticket for a friend now added.
I saw a guy on Reddit worldspawn00 was making a mining controller
Which I thought had some promise, it begs the question… will we get Farming Sim style controls for everything in the future, will lots of people start producing custom controllers? I love the idea of them but wouldn’t want to build one myself.