Welcome to some more Star Citizen Weekly News going over a quick summary of the week’s goings on in Star Citizen with a look at AtV, RtV, The Argo SRV Concept Sale & Roadmap Updates for the Project this time for the week ending the 17th of February 2019.

Roadmap
Nothing has slipped from the PU Roadmap this week.

Steady progress has been made on 3.5, ArcCorp and Area 18 seeing a lot of work done for the patch. Additional tasks have been added for Vehicle Scanning Improvements and Vehicle Tech Updates though.

The Law System v1 has been added to Alpha 3.6 – A hierarchical jurisdictional system that allow areas to be associated with a set of laws, each of which may specify a variety of penalties. Detection and dispatch mechanics will, in turn, accordingly enable local security and bounty hunters to make living a life of crime a dicey, if potentially lucrative, proposition. NPCs will also enforce these laws where appropriate.

For Alpha 3.8 they have started work on Eddie Parr one of the new Mission Givers located at microTech.

On the Squadron 42 Roadmap front nothing has slipped from the schedule and Q1 progress is going well with FPS AI Collision Avoidance v2 getting a huge amount of it’s feature done now. Aslo the Vehicle HUD and thankfully the New Atmospheric Flight Model have seen a lot of tasks completed.

The Squadron 42 Newsletter and Update came out too, I’ll get a full summary of this up by Monday. Here is a Sneak Peek at an Armored Vanduul, a Tram System & extior shot of Shubin mining facilitiy, some more Ship Jacker Armor & the very judge dread looking  Basilisk Advocacy Agent armor. 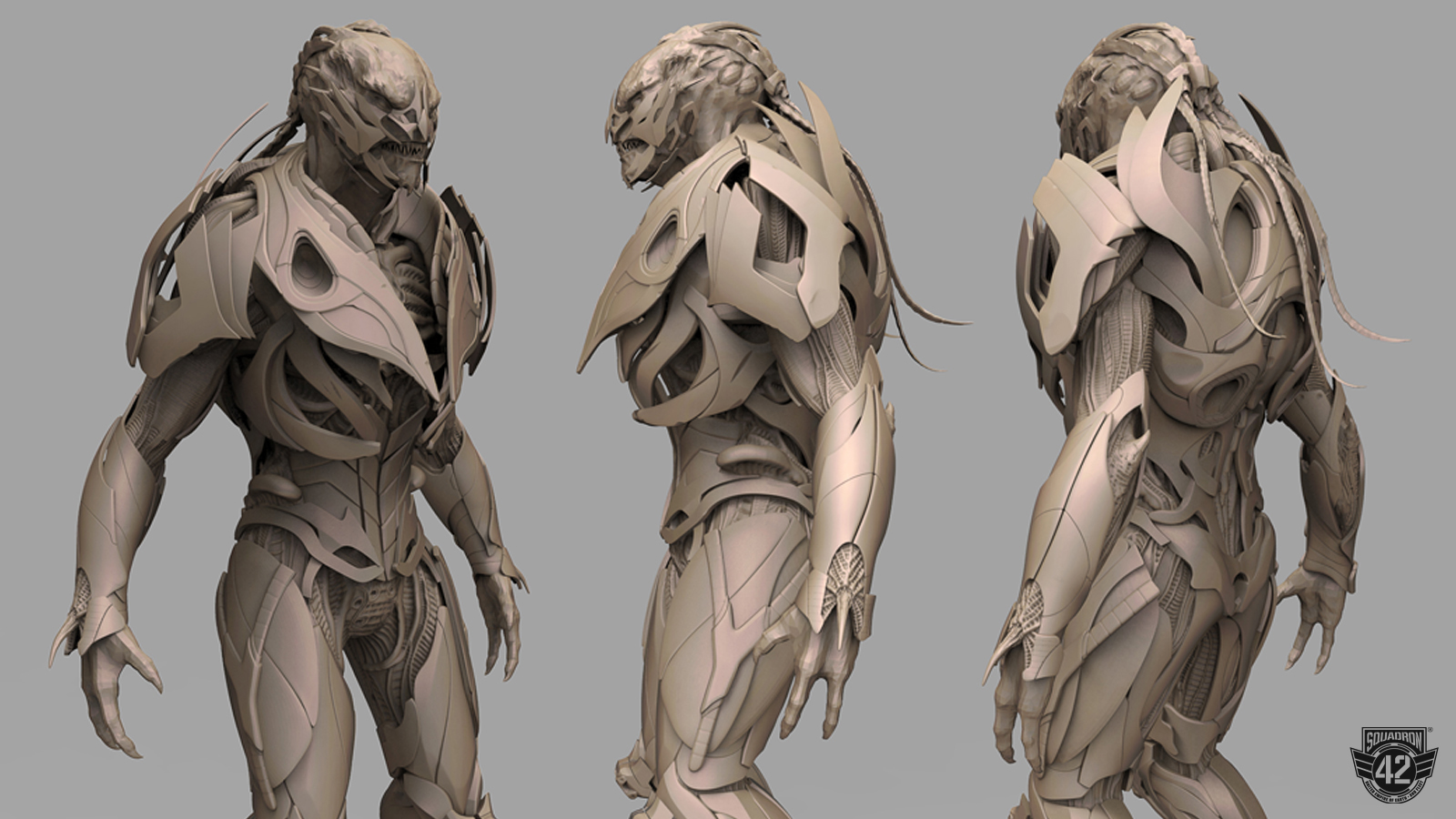 Newsletter
The Sneak Peek from the weekly RSI Newsletter was of the Carrack MessHall that they are building out. 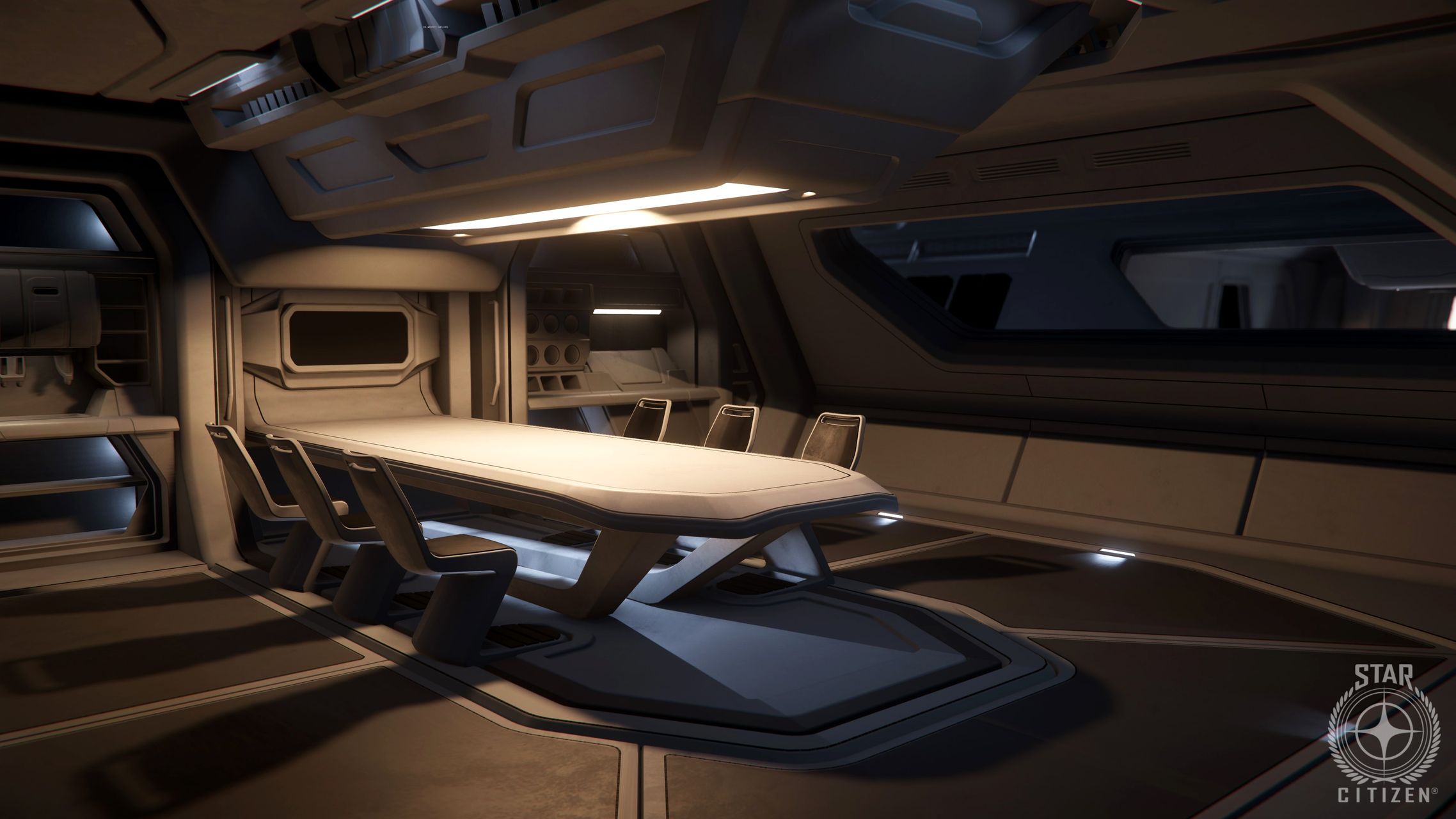 RSI Subscribers are currently able to fly the Hawk for free during Feb and are also being given a set of armor piece by piece, this month it’s for a the Rust Society Venture Helmet, Imperator-level subscribers also get the RSI Beacon helmet in addition to the Venture edition.

Around The Verse
They have been optimizing Character draw calls for much better GPU/CPU resource use.

In Alpha 3.5 ArcCorp will have the illusion of moving Traffic across the streets below. At the moment this is very basic, just textured roads and little moving vehicles with lights.

The idea is that you’ll be able to see these moving lights and feel more immersed in a living city.

Reverse The Verse
In the vacuum of space the sound you are hearing is being simulated at least that is the in lore explanation. They are toying with the idea of having this simulated sound module that your character has been able to take damage, wear or be affected by environmental effects.

They are looking at Voice Changers in Voip natively in game.

We can have ship wide announcements and a PA system for that.

The Piano should be functional in the future.

There isn’t any plans to have sound delayed by distance.

VOIP signal strength will be based on distance and environmental factors.

Sales & Ships
The Argo SRV is on Concept Sale now until the 4th of March, it’s a small tugboat that focuses on tractor beam gameplay, it is a pure utility ship and has NO WEAPONS, there is a Q&A thread for that too. There is also a Hornet HeartSeeker which is a new loadout for the Super Hornet available from a Valentine’s Day Sale, it has some better base components than the SH and a full Bering Laser Cannon Loadout, The HeartSeeker will be flyable in Alpha 3.5. Please checkout my dedicated videos on those for more information. But multipacks of SRVs are available as are packs with the other Argo ships. The Cyclone RC and 85x are currently available too.